I can't believe I overlooked this useful coincidence for so long. The distance from Hurd Field to Mill Street, one and three-quarter miles, is also the distance from Alewife to Mill Street. If you do as I do most days, entering the trail at Hurd, going east to Mill Street and then turning around, the outbound milestones show your total distance -- no computation needed until you get to Bedford and turn around again.

Posted by Trail Skater at 9:09 AM No comments:

I can't get over how lush the greenery is this spring. 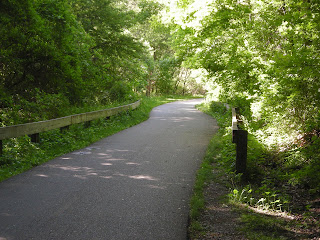 Posted by Trail Skater at 6:14 AM No comments:

The trail is covered in every kind of small debris after yesterday's thunderstorms: oak blossoms and maple seeds; branches, twigs, and leaves; and stones, gravel, and sand. I didn't fall, only staggered and flailed each time an unexpected stone or stick caught in my wheels. Bicyclists will be fine, I think, while runners might have to break stride or zigzag a bit to avoid missteps.

Thursday morning update: One day of traffic and wind has cleared away most of the lighter debris. The East Lexington shoals are the worst remaining problem. These are low islands of sand, gravel, and stones that form west of Bow Street in Lexington, behind the plaza including Ixtapa Mexican Restaurant and The Music Emporium. There are smaller patches at Fottler Avenue and the private driveway west of Seasons Four.

The weight loss group at my office had its first regular weigh-in today and showed the psychological strength of piddling financial incentives. Everybody lost weight, an average of three pounds in ten days. I'm $12 ahead (lost 4.5 pounds, 1.5 more than average) and one person is $16 ahead. Next week, I'm sure, the people who lost money this time will be out to recoup their losses.

Nobody skipped breakfast, so far as I know, but I did put off rehydrating after this morning's skating.

Posted by Trail Skater at 12:55 PM No comments:

The Bedford section of the trail was decorated with fresh-cut grass this morning as the robot mower worked its way toward Lexington. This isn't an automatic robot, but a robotic arm of sorts mounted to a medium-sized piece of heavy equipment. The operator can lift and tilt the mower head at the end of the arm or move it closer or further from the tractor. It's an excellent tool for mowing the trail's long and irregular verges.

Yesterday was fine and breezy, this morning was cloudy and less breezy, and after this afternoon's thunderstorms the rest of the week is forecast to be fair and warm. With luck, I'll catch up a bit toward the ghost of 2007.

I've long relied on skating and walking for weight control, never any fad diets or support programs. The closest I've come to an organized group was The Fat Man's Club when I worked at Wang Labs in the mid-80s. Prospective members showed up on the first workday after New Year, weighed in, and put $25 in the pot. Successful members showed up 15 pounds lighter on April 1st and split the pot. No other meetings, no advice, no support, just the prospect of a payoff. (I made the grade and collected $45.)

Now a current co-worker has put together something similar, but with more checkpoints. At each weekly weigh-in, you pay $1/pound of difference to everyone who lost more weight than you did and receive $1/pound if you out-dieted them. Moving with the group average is a financial wash. You win money by pulling ahead and lose it by falling behind, so there's your cash incentive.

I might be at a disadvantage from having the lowest starting weight in the group. (It's not that my co-workers are so fat, it's that they're taller than I am.) I'll let you know how this develops.

Infrastructure Study on the Minuteman Bikeway

Posted by Trail Skater at 3:06 PM No comments:

Thanks largely to research by Yury Kats, I'm confident now that the post marked R is a ring post, signalling the driver to ring his bell, and not a resume speed marker. The first strong evidence is the following paragraph from page 229 of Elements of Railroad Track and Construction by Winter Lincoln Wilson (John Wiley and Sons, 1915).

Whistle and Ring posts are described as identical except for the letter displayed. Sure enough, our mystery post has just that relation to the whistle posts near the Bedford end of the trail. Past the Bedford end Yury saw matching W and R posts on the Reformatory Branch Trail and found them described in the trail guide as whistle and ring posts, respectively.

Last week: 0 miles due to a terrible head cold. This week doesn't look good either, with high winds forecast tomorrow and rain on Tuesday.