I've had a few bad encounters with motorists in fifteen or so years of skating on the Minuteman Bikeway. I reported one scofflaw to her employer. I've filed the RMV's Complaint of Improper Operation form (PDF link) three times and gone to two RMV hearings. I complained to the Lexington police about a driver who threatened to kill me, both by his bad driving and in a crazy outburst. The problem with these efforts is that the driver only has to lie to get away clean. The nut job told police that I misheard him, that he didn't really scream "I'll run you over, you fucking weirdo!" The RMV never tells complainants about outcomes. And the delivery driver's employer promised to look into it, but wasn't sure which of their drivers might have been where I saw her. It's hard to make a complaint stick.

For drivers, a dashcam is the modern witness to accidents and incidents. For cyclists there are helmet cams. I wanted something smaller, lighter, and cheaper, so I bought a MeCam.

The MeCam is minimal video camera in a flat, round case about the size of a several dollar coins stacked. (I mean Eisenhower dollars, not Sacajawea.) The built-in battery charges via USB. For $50, $60, or $70, your MeCam comes with a 4GB, 8GB, or 16GB MicroSD card in your choice of color. Those memory cards will hold about 1, 2, or 4 hours of video. No matter which one you get, the battery only promises 80 minutes of recording. My hopes were that a MeCam would shoot adequate witness video, the battery would last through a typical outing, and the controls wouldn't be too frustrating.

The clip below demonstrates MeCam's cellphone-like video quality. That's no surprise -- it certainly has a cellphone camera inside. You can see the traffic lights, the walk lights, the traffic flow, and every twitch of my head in the sample. (The camera is stuck to my helmet with Velcro.) Leaving the camera to run itself out, I got about 78 minutes of video before it quit. That's enough for my purpose and pretty close to the advertised 80 minutes.

The controls are MeCam's worst feature. These are three tiny buttons set unfortunately close together on one side of the case. Turning the camera on or off or starting video recording requires holding a button for several seconds and watching for feedback from an led set into the top of the case. Bobbling the controls means accidentally taking a still photo or a useless video fragment. One incident corrupted the memory card and annoyed my Linux desktop. Another incident left a corrupt video fragment that freaked out iPhoto. If you're not comfortable poking into the memory card's file system, these could be big problems.

The brief instructions supplied with MeCam weren't written by a native speaker of English. They mention some way of timestamping video which I don't understand. They don't mention how to set the camera's clock: all my videos show file dates in 2007. [Update: see below, after the video.] Despite these minor problems, I think it was a good choice.

Update: What I misunderstood as instructions for adding a timestamp were really explaining (or trying to explain) how to set the camera's time. Write a plain text file named time.txt with contents such as 2013-06-03 13:12:00 into the root (top-level folder) of the camera's file system. Shoot a video. The file will disappear and the camera's clock will be set.

I've avoided the detoured portion of the trail between Woburn Street and Seasons Four this week, expecting that the detour consists of being dumped out on Mass. Ave. Not the case. Well, sort of the case, except that a lane's worth of Mass. Ave. on the north side has been marked off with construction barrels to keep the cars out and make the detour reasonably safe. It's way better than I thought.

Posted by Trail Skater at 8:38 AM No comments:

I've searched a few times to learn how many calories per hour a person uses for inline skating versus other exercises and I've found various answers. Last week it occurred to me that calories per mile might be a better measure. Googling that instead brought me to Phil Lenihan's In-line skating Calorie Usage Chart, which gives calories per hour for various body weights and paces. Phil credits "Rollerblade / University of Massachusetts Fitness Study" for the original data.

Plotting Phil's numbers made me think that Phil made some transcription or arithmetic errors. I haven't found the study he cites, so I reverse-engineered his numbers into a formula for my own spreadsheet. For example, if I weigh 140 pounds and skate 10 miles per hour (both of which were true today), I use about 500 calories per hour. I don't expect these numbers to be very accurate, just to be a general guide.

Posted by Trail Skater at 8:19 PM No comments:

The trail will be closed between Seasons Four and Woburn Street in Lexington starting May 13th for replacement of a failed culvert. Go around via Mass. Ave. instead. Work is expected to take several weeks. See Lexington DPW Contract #13-56 for details. 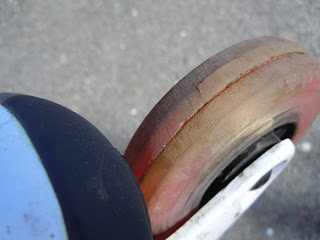 Posted by Trail Skater at 9:20 AM No comments: