Two women on bicycles overtook me as I came inbound toward Woburn Street. Let's call them Ablivia and Oblivia. Ablivia wanted to turn left at Woburn Street, so she moved left in the crossing until she was completely out of the trail. Oblivia wasn't turning left but wanted to chat with Ablivia until the very last second, so she moved into the left lane of the crossing. She kept that lane blocked against oncoming traffic, forcing an oncoming cyclist to swerve around her and come straight at me. He missed me because he was paying attention.

Neither A. nor O. wore a helmet. If they notice their bad behavior at all, they must imagine that only other people will be injured by it.

Posted by Trail Skater at 10:16 AM No comments:

A co-worker is training for the Northshore Inline Marathon, held each September in Duluth. Searching for something closer to home, I found a directory of North American Inline Skating Marathons at about.com. It looks like New York and Montreal are the closest events to Boston, both in September.

Posted by Trail Skater at 2:56 PM No comments:

I was always entertained by the illustrations in Make Way for Ducklings when I read it to my children. Not only for the obvious local interest -- we live near Boston and know the setting well -- but because I worked then for Thinking Machines Corporation in the former Carter Ink building. I could point to my own office window in the background as the ducks nested on an island in the Charles. 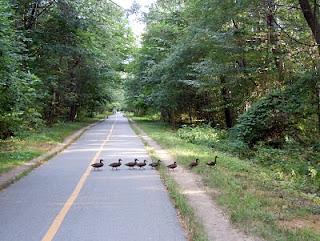 Posted by Trail Skater at 8:37 AM No comments:

At Seasons Four this morning I saw an inbound cyclist turn left into the parking lot directly in front of an outbound cyclist. I can only imagine she never bothered to look for oncoming traffic. Maybe a good shouting-at will inspire her to be more careful.

Posted by Trail Skater at 1:17 PM No comments: