Last Friday, the trail was a lumpy sheet of ice. Today it's surprisingly open and unsurprisingly wet. Just step around the dog droppings. Between Water and Mill in Arlington, be aware that the plow wandered from the trail a bit. The cleared pavement goes down to as little as a foot wide. 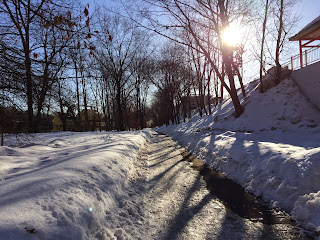 Bicycle tracks in the ice 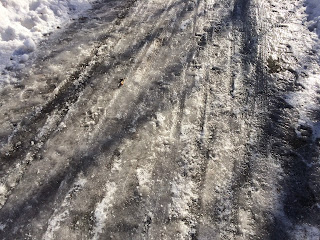 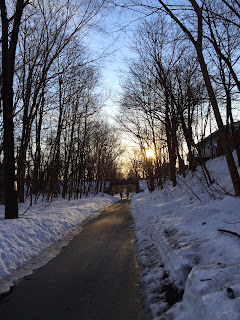 Water at Fottler Ave was too deep for my sneakers 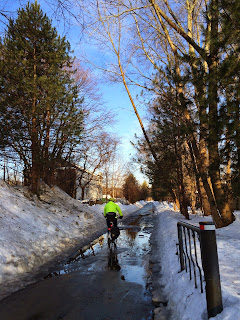 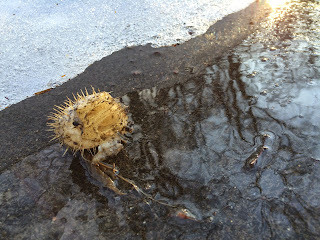 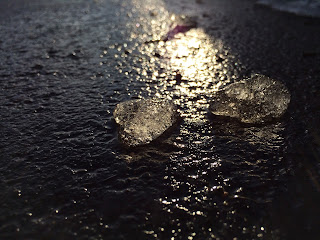 I skated little and blogged even less this summer. Not to worry, I'm still alive and skating vigorously through the waning days of the season.

Lexington and Bedford repaved parts of the trail this summer. Bedford redid pretty much their entire section, west from Wiggins Avenue to Bedford Depot Park. Lexington fixed two of their bumpier sections. One repaved area is from the Arlington line west to Fottler Avenue where the trail always filled up with sand among the tree roots during each heavy rain. The other is one of the shortest trail sections, from Woburn Street and Hayes Lane over to Fletcher Avenue. The work there included the inexplicable installation of a bumpy crosswalk warning ("tactile paving") on just one side of the Fletcher Ave crossing. The newly rebuilt ramp to the roadway no longer meets the pavement properly. I hit the edge there Saturday morning and fell onto the tactile paving. No harm except for strained muscles.

[Update: Lexington patched the transition from road to ramp with asphalt. It's hugely improved. Also, falling onto a wrist guard leads to large and strangely shaped bruises on the chest.]

Since my post on tracking apps, the publishers of Moves have gone quiet on Facebook. They never responded to complaints there about Moves lumping together disparate activities with no way to separate them afterward. They didn't fix the app, either, so I've stopped using it completely. I expect a new crop of fitness tracking app features with the advent of HealthKit in Apple's iOS 8, but it's not quite here yet.

I've switched out the MeCam on my helmet for a Mobius Pro Mini Action Camera. It's superior to the MeCam in resolution and optical quality, both important if you're hoping to get the license plate of that jerk who blew through the crosswalk. The Mobius camera comes with a mount to be used with either Velcro or a standard tripod mount. I put a 1/4" x 20 bolt through the crown of my helmet to make a secure mount. Think carefully about the camera angle before you do that. You can configure the Mobius camera to overwrite the oldest video segments as it needs space for new ones, sparing you the need to manually clean up when the Micro SD card fills. A minute of 1080 HD video takes about 110 megabytes. Each five minute segment (the recommended size for endlessly rotating files) is over half a gigabyte and an 8GB Micro SD card will hold about fourteen segments, 70 minutes worth. The camera handles changing light conditions decently. Facing the sun is a problem, as it is for any camera. The boring sample below was shot eastbound, facing the morning sun, between Fottler Avenue and Bow Street in Lexington. It was shot as 1080p ("full HD") and uploaded as 720p.

Posted by Trail Skater at 8:18 PM No comments:

[In case you're not familiar with them, the stone mile markers along the trail are marked in modified Roman numerals. Outbound they start with no mark at Alewife, then count I through X from East Arlington to Bedford Depot Park. Oddly, Bedford Depot says I on the facing-inbound side. The inbound marks count up to X in East Arlington, with nothing at Alewife where it could have said XI.]

This year I'm modernizing with a couple of activity tracking apps: Moves and MapMyFitness. These two have different aims, strengths, weaknesses, and bugs. I chose them with minimal research. If you read this post, you'll have done more research than I did.

Moves is a continuous activity tracker. You carry your phone, the phone records your location and movement, and Moves tries to figure out what you did. It's pretty good at figuring out whether you're walking, running, or riding in a car. It's not so good about bicycling, though it tries. (My ride on a Swan Boat in the Public Garden was recorded as cycling, no matter that the map showed me moving over water.) It doesn't even try to identify many other activities, including skating. The developers say that's no problem! You can edit an activity afterwards. And they'd be right except for one horrendous misfeature. Once Moves decides that some period of time is all one activity, you can't split it up. If I drive to a trail entrance ("Transport"), skate up and down the trail ("Transport"), then drive to my office ("Transport"), Moves calls that a single event. Several users have complained about this on Moves' Facebook page and gotten no reply. (I'm one of the complainers.) I reported this as a bug with the same result.

Another aspect of Moves is that it's now owned by Facebook. When that was announced, Moves swore that nothing would change and users' data was private. Two weeks later they changed their minds: your data might be available to "affiliates". If you worry where your personal data goes, there's your deal-breaker.

MapMyFitness (also MapMyRun, Ride, Walk, Hike) is for logging specific exercise events. You choose your activity, tap "Start Workout", and you're off. Potentially with your friends tracking you, if you enabled live tracking. Sharing and measurement are the major themes. The app records your location, distance, time, pace, split times, elevation -- and that's before you add optional hardware for pulse, . The MapMyX folks offer an inexpensive heart monitor which tells me that generic maximum heart rate formulas aren't much use.

Overall, the MapMy apps collect a pile of data for you, display it a few different ways, and offer to share it with your friends. I'd personally be happier with a more focused approach. I'm not interested in a pace vs. elevation chart and I'm skeptical of the app's calorie estimates. On the other hand, I might be fitter with a broader range of exercise, so a flexible app comes in handy.

Posted by Trail Skater at 1:20 PM No comments:

AAA will tow you and your bicycle, no car required

AAA of Southern New England, like some other regional AAA clubs, now has roadside service for bicyclists and their bicycles.

Posted by Trail Skater at 5:32 AM No comments:

In only six short years (at the very earliest), you can take the Minuteman Trail from Bedford to Alewife to Davis and the Somerville Community Path from Davis to Lechmere. The Minuteman exists and the Community Path exists up to Cedar Street, just short of the new Lowell Street station. From there to Lechmere will be new trail following the upcoming Green Line Extension. I'll be over 60, but I'm looking forward to when I can skate from my home in Arlington to the Esplanade in Boston.

Read more about the project on the Arlington Patch ("State Announces 1.9 Mile, $39 Million Path Along Green Line Extension Project") or in The Boston Globe ("Somerville bike pathway to expand").

Posted by Trail Skater at 8:40 AM No comments:

Posted by Trail Skater at 12:44 PM No comments: