There was a welcome outbreak of courtesy along the trail today. At least three-quarters of the passing cyclists signalled loudly and clearly "passing on your left!", not mumbling "left" at the ground. One dog walker apologized that I had to wait a moment to see which way the dog would go, and another held her dog back at a crossing even though I had a stop sign.

Morning ice on a vernal pool in Lexington 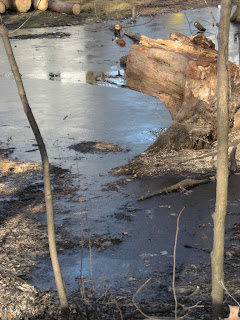 Posted by Trail Skater at 2:18 PM No comments:

Browsing at the Inline Skating Resource Center, I saw that Saturday, May 12th will be Free Inline Skating Lesson Day. In the Boston area, the participating skate school is Four Wheels Inline.

Trail Conditions - The coast is clear, sandy, and wet

There's clear pavement all the way to the Bedford end of the trail, if you don't mind some sand at the street crossings and a little run-off from the last of the melting snow.

Last night's expected one to three inches of snow didn't even stick to the pavement in Arlington. With today's high in the upper forties, I'm confident the trail will be clear tomorrow.
Posted by Trail Skater at 8:02 AM No comments:

A cycling co-worker tells me the trail is passable today from Alewife Station to Seasons Four in Lexington, with just a little bit of walking. Monday might be a good day.
Posted by Trail Skater at 12:49 PM No comments:

This mess won't melt for a week. 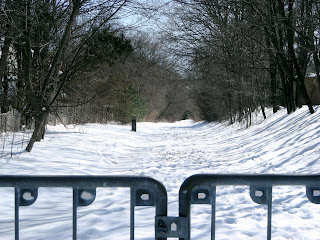 Posted by Trail Skater at 9:37 AM No comments:

The trail is clear of snow and ice from Alewife to Arlington Center. Arlington Heights is still messy.

Geese on the water and ice at Spy Pond. 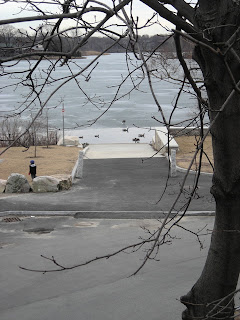 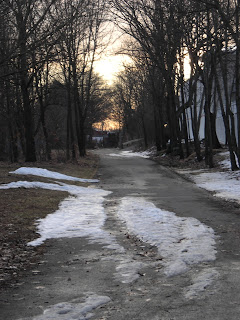 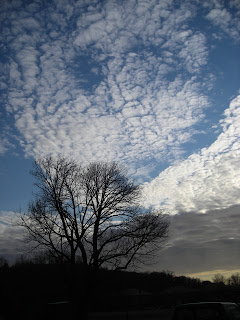 Posted by Trail Skater at 5:56 PM No comments:

There's more asphalt than ice, but the ice wins. 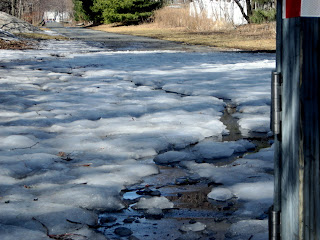 At the Lexington Depot: 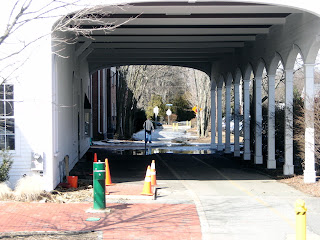 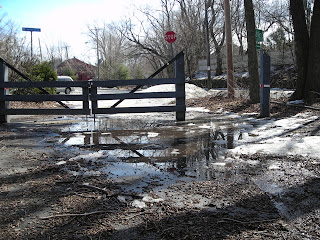 Posted by Trail Skater at 6:31 PM No comments:

Like the first issue of a new comic book, this is where you discover the origins of your hero and how he came into the role he'll play throughout the series. This story starts on a March day in 1999, when I admitted I had to lose five pounds or buy new pants. I'm allergic to clothes shopping, so I figured I'd eat a little less, go skating along the trail a few times, and lose the weight. I overdid it.

By early August I was down 35 pounds to a weight I hadn't seen since I was 14. I was wearing maybe-they'll-fit-again-someday clothes from the attic. My boss asked me to stop so that I wouldn't weigh less than she does. (She's taller than I am and in no danger of suffering by comparison.) Another co-worker asked in a hushed and urgent voice if I were all right -- she thought I must be terribly sick to lose so much weight. At a blood drive that August the examining nurse asked, "Are you athletic?" I was baffled by the question, which turned out to mean, "Why is your resting pulse only 50 beats per minute?" 1999 was a huge success and I fell in love with inline skating.

I started setting annual skating goals in 2004. The first goal was to skate more than ever before, which I made by a measly half mile that year. Such a pathetic achievement called for a more ambitious goal and in 2005 I set out to skate the distance from my home in Arlington, Massachusetts to the home of the blues in Memphis, Tennessee. I barely got there, held back by an attack of lethargy that lasted most of September and October. My 2006 goal was the distance to my mother's home in Stillwater, Oklahoma. Unseasonably warm weather kept the trail clear through December for an eleventh hour success. In 2007, I'm aiming for the same distance with an earlier finish. This blog and online tracking of my progress will keep the pressure on.
Posted by Trail Skater at 6:35 AM 2 comments: