Posted by Trail Skater at 12:44 PM No comments:

What's left of the snow 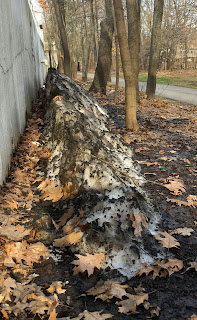 The Mill Brook is a better sight, running fresh and full. 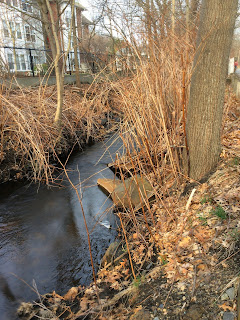 Posted by Trail Skater at 6:07 PM No comments:

Since 2007, the State planning authorities have been collecting data about the numbers of users of the local bikeways and trails. Arlington has been asked to join in collecting user numbers for the Minuteman Commuter Bikeway. On Tuesday, May 6 and on Saturday, May 10 counters will be needed to count and record user numbers from 7 AM to 7 PM; counters will be located at the plaza at Swan Place, near the Kickstand Cafe. It will be Baystate Bike Week, and your helpful participation would be be especially apropos!

The Arlington Bicycle Advisory Committee is coordinating these two days of counting. We are seeking volunteers for 1-2 hr. commitments of time to count the different numbers and types of users – walkers, cyclists, skaters, etc. If you can take the time, we’d appreciate your help; contact Joey Glushko in the Dept. of Planning and Community Development (781-316-3093; or e-mail jglushko@town.arlington.ma.us ) with your name, contact information, and the date/time(s) that you can volunteer. We will provide the forms and pens and clipboard for ready and easy use; you only need dress comfortably for the weather, and you might like to have sunglasses and sunscreen for a sunny day!

An example of the counting form is attached; you'll see that it is an easy task. The counting day will take place even in inclement weather – though heavy rain will cancel the day’s counting.

Contact me if you have questions. We'd appreciate your participation for this annual project.
Joey Glushko, Planner
Planning and Comm. Devel.
Arlington, MA 02476

Posted by Trail Skater at 5:48 PM No comments: