The continuing excavation of Woburn Street in Lexington reveals some old tracks running along the street there. These could have been a siding, spur, or branch of the railroad that later became the Minuteman Bikeway, but their orientation along the street makes me think of streetcars. I've written to the Lexington Historical Society to ask if they know something about this.

Update: The Middlesex and Boston Street Railway had a Lexington - Woburn line. Did it run on Woburn Street in Lexington? I don't know yet. Further update: Yes, it did. 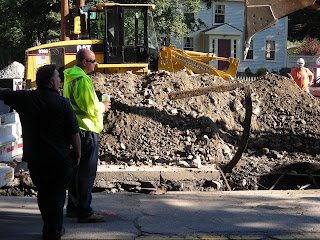